The scope of this Homepage is to present some information concerning structure and interpretation of the counting of the days which was used in Anahuac, namely the tonalpohualli.

The book of Prof. Rafael Tena “El calendario mexica y la cronografía” (INAH, 1987) was taken as a basis for an objective and scientific analysis. Together with this important work, it is also interesting to consider the article “Xolpan y Tonalco” of Carmen Aguilera, which was published on “Estudios de Cultura Náhuatl”, vol. 15.

Now comes the question: How could we make a calendar conversion for the present day ? The first adjustment we have to do, is the conversion from Julian-Calendar to Gregorian-Calendar (10 day were cut out the year AD 1582, so that the 4 October 1582 was followed by the day 15 October 1582). This adjustment of 10 days would place the beginning of the Mexica-Year on the 23 February (+/- 1 day). This is an estimation, because many years have passed after AD 1521 (last year in which we have a date reported both in European- and in Tonalpohualli-System) and since then there have been made adjustments to the European-Calendar (for example the years 1700, 1800 and 1900 were, according to the Gregorian-System, not leap years). It is very difficult to try to find out how the people of Anahuac would have compensated over the years the error of the adjustment each 4 years. It is impossible to answer this question with absolute reliability. Nevertheless, for our scope it is not necessary to know how this adjustment had to be made. If a “Tlamatini” (wise man, skilled expert) of the Pre-Cuauhtemoc period came here nowadays, he would establish the count of the days in the same way that it was created, namely by observing the sky and the daily motion of the heavenly bodies. In our time, the winter solstice begin on the 22 December (21 December on leap years). Carmen Aguilera demostrates in her article “Xolpan y Tonalco” that the Panquetzaliztli feast was carried out 2 days before the winter’s solstice. That means, that today the 22 Dezember would correspond to the second day of the month “Atemoztli” and therefore the year must begin on 24 February. This date is not far away from the initial correction, putting the beginning of the calendar on 23 February. That means, that the 24 February is a day “ocelotl” (ocelot) in the years “acatl” (reed), “quiyahuitl” (rain) in the years “tecpatl” (flint), “cuetzpallin” (lizard) for the years “calli” (house) and “atl” (water) in the years “tochtli” (rabbit), whereas the numeral of the day has a unit less than the numeral of the year, as mentioned above.

Before we continue, there is an interesting detail: Starting the tonalpohualli nowadays in the way described above on 24 February, we find that the yearbearer day (day carring the same name as the year) appears everytime on the 14 May (13 May in leap years). This is the day on which the sun reaches for the first time in the year the zenith of Xochicalco. In the chapter “Calendar correction of Xochicalco” it is shown that the cause of this correction was exactly the compliance of the yearbearer day with the course of the sun in the zenith of Xochicalco. This system was adopted by the toltecs and later by the mexicas and other cultures in the centre of Mexico. Nevertheless, in other regions like the Mixteca, the calendar system that was used prior to this calendar correction was still being applied until the arrival of the Spaniards.

Now we invite you to visit our sections “years” and “days”. We explain there, how the tonalpohualli works. There are some tips to make the calendar conversion for the present day even if we do not have conversion tables.

At the end, in the section “Origins of the tonalpohualli”, we make some comments about how and where the tonalpohualli with its 260-day cycle could have been created and on which day it began originally.

We wish you a pleasant reading !

For questions and comments please feel free to contact us on following e-mail:

ATTACHMENT / SUN STONE. THE TWENTY DAY OF THE TONALPOHUALLI ARE REPRESENTED ON THE INTERNAL RING 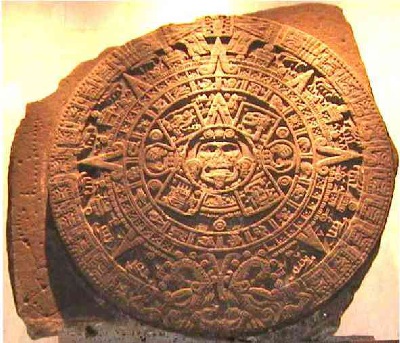